A preview of Herbie Hancock, who performs on the Flynn Main Stage Wednesday, February 6.

Burlington and the Flynn Center have lucked out, glomming onto the honor of being the kick-off spot for the first date of Herbie Hancock’s 2019 tour: Wednesday, February 6!

Hancock’s one of the most revered artists in modern jazz, and I can prove it! He rates one and a half pages of bio and reviews in the “All Music Guide to Jazz,” print edition. That’s right up there with the space afforded to Wynton Marsalis, who, I think we can all agree, is also right up there.

Now, that’s not quite commensurate with the six and a half pages that Miles Davis gets in that same book, but, hey, he was Miles Davis! And it was with Davis that Hancock got his big break, playing in Miles’s famous mid-1960s band while also making solo records (remember Watermelon Man and Maiden Voyage?)

In the half century since then, Hancock has followed his acoustic jazz path while also wandering to many other genres. From modern classical music, he cut a George Gershwin tribute album, and River: The Joni Letters comprises his interpretations of Joni Mitchell songs.

But back in the 1960s, Hancock was one of the first jazz artists to “go electric,” adding first electric piano at live gigs, then exploring the Hohner clavinet and, soon, synthesizers and computers.

It was in these electrifying realms that he found his greatest success, first with the song Chameleon, from his Sly Stone–inspired Head Hunters band in the ‘70s; their self-titled album was jazz’s biggest seller up to that time. An album whose cover was as memorable as the music inside! 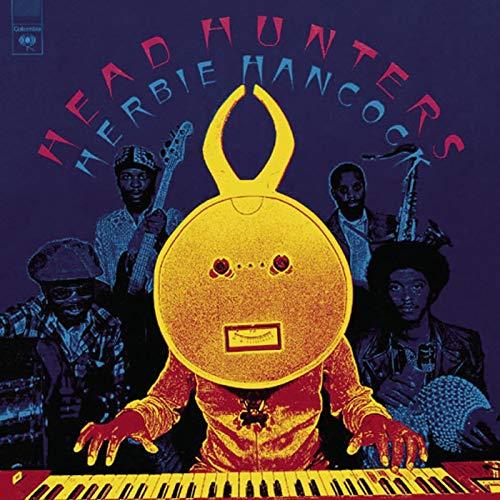 Then in the ‘80s, at the time when new wave punk collided with the birth of hip-hop, Hancock struck again with the record-scratching, techno-drumming, and all synthesized Rockit, its success propelled by a video on the then-new MTV featuring outlandish and creepy hand-made robots. (Having seen them, who can forget the “dancing pants”?)

Rumor has it that Hancock plans to focus on his Head Hunters era and related sounds on this year’s tour. And the band that he’s gathered seems to bear that out.

Terrance Martin, on sax and keyboards, is mostly known as a producer, working with R&B artists such as Stevie Wonder, Kendrick Lamar, and Snoop Dogg, which supports the idea of Hancock exploring his Head Hunters era.

James Genus’s “day job” is playing bass in the Saturday Night Live orchestra, but he’s been walking that bass since the late ‘80s for a number of stellar jazz artists, including Horace Silver, Nat Adderley, Branford Marsalis, Bill Evans, and the aforementioned Chick Corea, with a side trip for a gig with Daft Punk (again, supporting the funk-era idea for Hancock’s show).

And even more support for a genre-hopping show is the drum slot, filled by Vinnie Colaiuta, who has set the beat for just about everybody, from Frank Zappa to Céline Dion, from Genesis to Joni Mitchell, and from the Beach Boys to, once again, Chick Corea. Who knows what he’ll bring to this band?

We know the greatness of which Hancock is capable, and we know the components of the band that he’s assembled, but where will he lead them and what will they achieve? We can only look forward to hearing what results.

Voyages: Herbie Hancock at the Flynn

Take Note: TURNmusic in Flynn Space
Please wait while we retrieve your events.