Presented by the Flynn and the Shelburne Museum 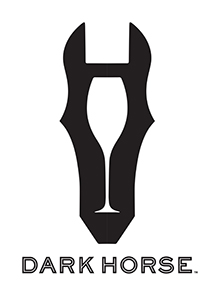 Artists are subject to change.
Program to be announced from the stage.

In 2015, Jazz at Lincoln Center announced the launch of Blue Engine Records, a new platform to make its archive of recorded concerts available to jazz audiences everywhere. The first release from Blue Engine Records, Live in Cuba, was recorded on a historic 2010 trip to Havana by the JLCO and was released in October 2015. Big Band Holidays was released in December 2015, The Abyssinian Mass came out in March 2016, The Music of John Lewis was released in March 2017, and the JLCO’s Handful of Keys came out in September 2017. Blue Engine’s United We Swing: Best of the Jazz at Lincoln Center Galas features the Wynton Marsalis Septet and an array of special guests, with all proceeds going toward Jazz at Lincoln Center’s education initiatives. Recent album releases include 2018’s Una Noché con Ruben Blades, 2019’s Betty Carter’s The Music Never Stops, 2019’s Bolden (Official Soundtrack), composed and performed by Wynton Marsalis. Wynton Marsalis' Swing Symphony, performed by the Jazz at Lincoln Center Orchestra and the St. Louis Symphony Orchestra conducted by David Robertson was released in July 2019. To date, 14 other recordings have been released and internationally distributed: Vitoria Suite, Portrait in Seven Shades; Congo Square, Don’t Be Afraid ...The Music of Charles Mingus, A Love Supreme, All Rise, Big Train, Sweet Release & Ghost Story, Live in Swing City, Jump Start and Jazz, Blood on the Fields, They Came to Swing, The Fire of the Fundamentals, and Portraits by Ellington.

Jazz at Lincoln Center is dedicated to inspiring and growing audiences for jazz. With the world-renowned Jazz at Lincoln Center Orchestra and a comprehensive array of guest artists, Jazz at Lincoln Center advances a unique vision for the continued development of the art of jazz by producing a year-round schedule of performance, education, and broadcast events for audiences of all ages. These productions include concerts, national and international tours, residencies, weekly national radio programs, television broadcasts, recordings, publications, an annual high school jazz band competition and festival, a band director academy, jazz appreciation curricula for students, music publishing, children’s concerts and classes, lectures, adult education courses, student and educator workshops, a record label, and interactive websites. Under the leadership of Managing and Artistic Director Wynton Marsalis, Chairman Robert J. Appel, and Executive Director Greg Scholl, Jazz at Lincoln Center produces thousands of events each season in its home in New York City, Frederick P. Rose Hall, and around the world. 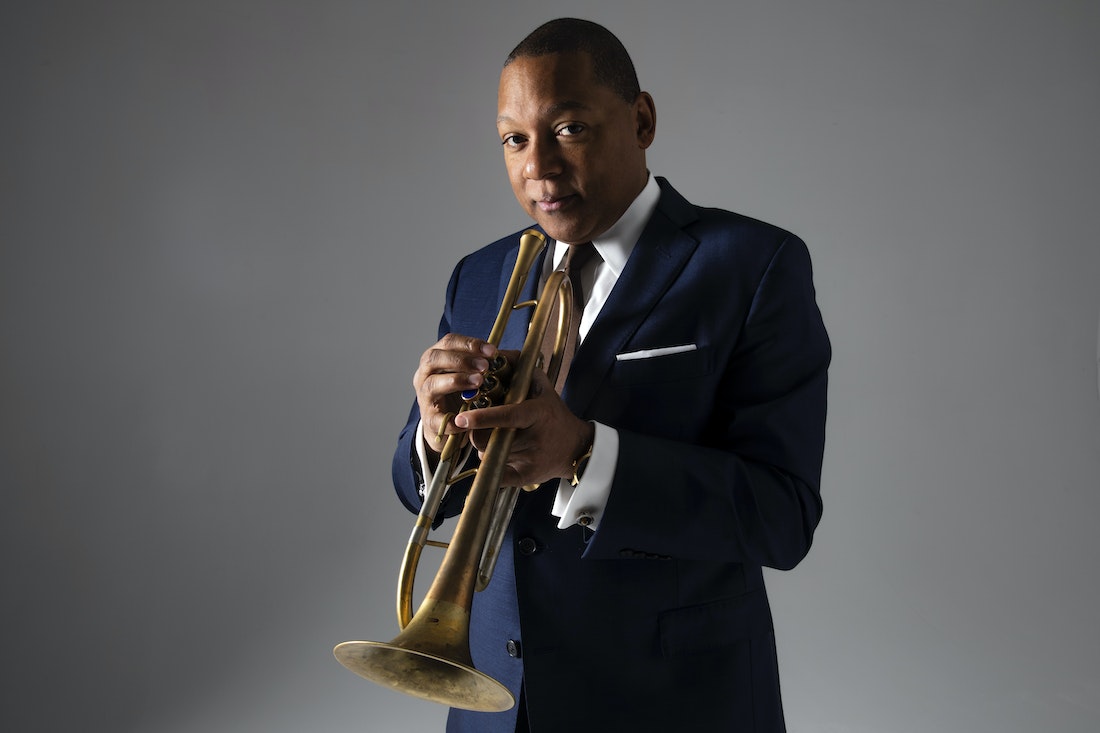 is the managing and artistic director of Jazz at Lincoln Center and a world-renowned trumpeter and composer. Born in New Orleans, Louisiana in 1961, Marsalis began his classical training on trumpet at age 12, entered The Juilliard School at age 17, and then joined Art Blakey and the Jazz Messengers. He made his recording debut as a leader in 1982, and has since recorded more than 60 jazz and classical recordings, which have won him nine Grammy Awards. In 1983 he became the first and only artist to win both classical and jazz Grammys in the same year and repeated this feat in 1984. Marsalis is also an internationally respected teacher and spokesman for music education, and has received honorary doctorates from dozens of US universities and colleges. He has written six books; his most recent are Squeak, Rumble, Whomp! Whomp! Whomp!, illustrated by Paul Rogers and published by Candlewick Press in 2012, and Moving to Higher Ground: How Jazz Can Change Your Life with Geoffrey C. Ward, published by Random House in 2008. In 1997 Marsalis became the first jazz artist to be awarded the prestigious Pulitzer Prize in music for his oratorio Blood on the Fields, which was commissioned by Jazz at Lincoln Center. In 2001 he was appointed Messenger of Peace by Mr. Kofi Annan, Secretary-General of the United Nations, and he has also been designated cultural ambassador to the United States of America by the US State Department through their CultureConnect program. Marsalis was instrumental in the Higher Ground Hurricane Relief concert, produced by Jazz at Lincoln Center. The event raised more than $3 million for the Higher Ground Relief Fund to benefit the musicians, music industry-related enterprises, and other individuals and entities from the areas in Greater New Orleans who were affected by Hurricane Katrina. Marsalis helped lead the effort to construct Jazz at Lincoln Center’s home—Frederick P. Rose Hall—the first education, performance, and broadcast facility devoted to jazz, which opened in October 2004. 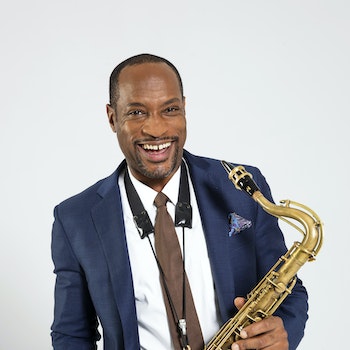 was born into a musical family on August 14, 1971 in Cleveland, Ohio and began playing the saxophone at age six. In 1981, he moved with his family to New York City;  by age 16, he was performing regularly with his parents at the Village Gate.

Blanding attended LaGuardia High School of Music & Art and Performing Arts and continued his studies at the New School for Social Research, where he earned a BFA in 2005. His 1991 debut release, Tough Young Tenors, was acclaimed as one of the best jazz albums of the year, and his artistry began to impress listeners and critics alike. He has been a member of the Jazz at Lincoln Center Orchestra since 1998 and has performed, toured, and/or recorded with his own groups and with such renowned artists as the Cab Calloway Orchestra, Roy Hargrove, Hilton Ruiz, Count Basie Orchestra, Illinois Jacquet Big Band, Wycliffe Gordon, Marcus Roberts, Wynton Marsalis Quintet, Isaac Hayes, and many others. Blanding lived in Israel for four years and had a major impact on the music scene while touring the country with his own ensemble and with US artists such as Louis Hayes, Eric Reed, Vanessa Rubin, and others invited to perform there. He taught music in several Israeli schools and eventually opened his own private school in Tel Aviv. During this period, Newsweek International called him a “Jazz Ambassador to Israel.” 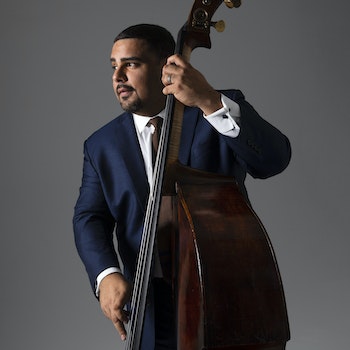 was born in 1979 in the Bronx, New York. He studied music at a young age, played guitar through junior high school and took up the bass while enrolled in The Juilliard School’s Music Advancement Program. He entered LaGuardia High School of Music & Arts and Performing Arts and was involved with the LaGuardia Concert Jazz Ensemble which went  on to win first place in Jazz at Lincoln Center’s Essentially Ellington High School Jazz Band Competition & Festival in 1996. In 1998, swiftly after high school, Henriquez joined the Wynton Marsalis Septet and the Jazz at Lincoln Center Orchestra, touring the world and featured on more than 25 albums. Henriquez has performed with artists including Chucho Valdés, Paco De Lucía, Tito Puente, the Marsalis Family, Willie Nelson, Bob Dylan, Stevie Wonder, Lenny Kravitz, Marc Anthony, and many others. He has been a member of the music faculty at Northwestern University School of Music since 2008, and was music director of the Jazz at Lincoln Center Orchestra’s cultural exchange with the Cuban Institute of Music with Chucho Valdés in 2010. His debut album as a bandleader, The Bronx Pyramid, came out in 2015 on Jazz at Lincoln Center’s Blue Engine Records. 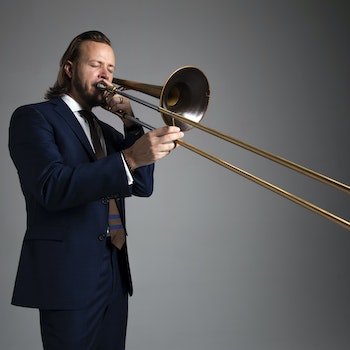 was born in England in 1977 and began trumpet lessons at age four with his father. At age seven, he switched his focus from trumpet to trombone. At 11 years old, he was performing professionally, concentrating on jazz and improvisation. At 16, Mason received a full tuition scholarship to attend Berklee College of Music in Boston, and after graduating he moved to New York City. Mason is a member of The Juilliard School jazz faculty as a jazz trombone professor, and he is also a part of the jazz faculty at New York University. Mason has served as a clinician worldwide, performing workshops, master classes, and clinics. Mason is endorsed by B.A.C. musical instruments and currently plays his own co-designed custom line of trombones. Mason has performed with the Count Basie Orchestra, the Mingus Big Band, the Maria Schneider Orchestra, the Maynard Ferguson Big Bop Nouveau, Chick Corea, Kenny Garrett, Bobby Hutcherson, Ahmad Jamal, Randy Brecker, and Carl Fontana. A member of the Jazz at Lincoln Center Orchestra since 2006, Mason also continues to co-lead the Mason Brothers Quintet with his brother Brad. The Mason Brothers recently released their second album, entitled Efflorescence. 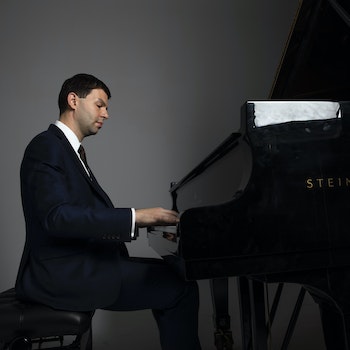 was born in 1982 in Milwaukee, Wisconsin. With prodigious technique and an innate sense of swing, his playing often recalls that of his own heroes, specifically Oscar Peterson, Wynton Kelly, Erroll Garner, and Art Tatum. As a young man, Nimmer’s family inherited a piano and he started playing by ear. He studied classical piano and eventually became interested in jazz. At the same time, he began playing gigs around Milwaukee. Upon graduation from high school, Nimmer left Milwaukee to study music at Northern Illinois University. It didn’t take him long to become one of Chicago’s busiest piano players. Working a lot in the Chicago scene, Nimmer decided to leave school and make the big move to New York City where he immediately emerged in the New York scene. A year after moving to New York City, he became a member of the Jazz at Lincoln Center Orchestra and the Wynton Marsalis Quintet. Nimmer has worked with Norah Jones, Willie Nelson, Dianne Reeves, George Benson, Frank Wess, Clark Terry, Tom Jones, Benny Golson, Lewis Nash, Peter Washington, Ed Thigpen, Wess “Warmdaddy” Anderson, Fareed Haque, and many more. He has appeared on The Tonight Show with Jay Leno, The Late Show with David Letterman, The View, The Kennedy Center Honors, Live from Abbey Road, and PBS’ Live from Lincoln Center, among other broadcasts. He has released four of his own albums on the Venus label (Japan). 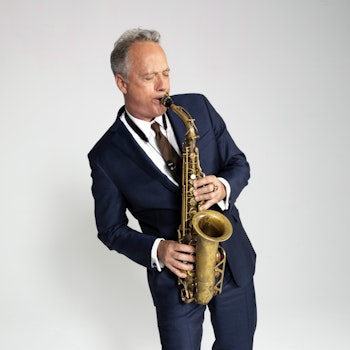 enjoys an extraordinary career as a performer, conductor, composer, arranger, and educator. Born in Los Angeles into a musical family--his father, Dick Nash, and uncle, the late Ted Nash, were both well-known jazz and studio musicians--Nash blossomed early, a “young lion” before the term became marketing vernacular. Nash has that uncanny ability to mix freedom with accessibility, blues with intellect, and risk-taking with clarity. His group Odeon has often been cited as a creative focus of jazz. Many of Nash’s recordings have received critical acclaim, and have appeared on the “best-of” lists in The New York Times, The New Yorker, The Village Voice, and The Boston Globe. His recordings, The Mancini Project and Sidewalk Meeting, have been placed on several “best-of- decade” lists. His album Portrait in Seven Shades was recorded by the Jazz at Lincoln Center Orchestra and was released in 2010. The album is the first composition released by the JLCO featuring original music by a band member other than bandleader Wynton Marsalis. Nash’s latest album, Chakra, was released in 2013. His most recent big band recording, Presidential Suite: Eight Variations on Freedom, won the 2017 Best Large Jazz Ensemble Album Grammy Award. The album includes Spoken at Midnight, which won the 2017 Best Instrumental Composition Grammy Award. Nash’s arrangement of We Three Kings, featured on the Jazz at Lincoln Center Orchestra with Wynton Marsalis’ Big Band Holidays album, was nominated for the 2017 Best Instrumental or a Cappella Arrangement Grammy Award. 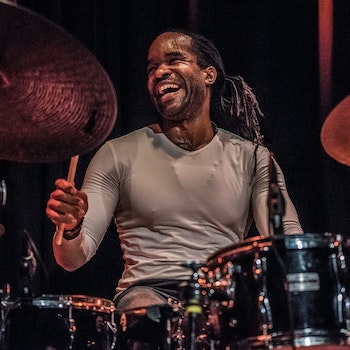 a native of Miami and of Haitian descent is a graduate with both a master and bachelor degree of music from one of America’s premiere private music conservatories in the nation, Manhattan School of Music. He received his bachelor’s degree in 2003, completing the undergraduate degree requirements in three years and receiving his master’s in 2005. Mr. Calvaire has performed and recorded with artists such as Wynton Marsalis, Seal, Eddie Palmeri, Vanessa Williams, Mark Murphy, David Foster, Mary J. Blidge, Stefon Harris, Kurt Rosenwinkel, Music Soulchild, Nellie McKay, Yellow Jackets, Joshua Redman, Steve Turre, and Lizz Wright to name a few. He has also performed with large ensembles such as the Village Vanguard Orchestra, Metropole Orchestra, the Mingus Big Band, Roy Hargrove Big Band, the Bob Mintzer Big Band, and has been a member of the SFJAZZ Collective since 2013. Currently, Obed Calvaire can be found playing with Peter Cincotti, Richard Bona, Monty Alexander, Sean Jones, Yosvany Terry, The Clayton Brothers Quintet, and Mike Stern, among others.