Visions of the World

Laurie Stavrand from the USCRI/Vermont Refugee Resettlement Program curates this exhibition featuring the work of Vermont artists, including paintings by Abeer Almogalli, Hom Pradhan, and Sabah Abbas, fashion and jewelry by Sahar Alsammarae and Virginie Diambou, and photographs by Umesh Acharya and the youth mentor program Crossroads: Where Cultures Meet.

The Vermont Refugee Resettlement Program is excited to be working with John Killacky to prepare a group exhibition of local artists, entitled Visions of the World, to be shown in the Amy E. Tarrant Gallery, from September 15 through December 1. The featured artists include painters Abeer Almogalli and Sabah Abbas, of Iraq, and Hom Pradhan, of Bhutan, as well as photographer and poet Umesh Acharya, from Bhutan, fashion designers Sahar Alsammarae and Virginie Diambou, who come from the Republic of Congo, and photographers from the Crossroads: Where Cultures Meet youth mentor program. The Visions of the World exhibition was initiated by John Killacky, and he has graciously volunteered to continue to work on his dream.

Each of the artists in this show is an immigrant with a refugee background. For immigrants, and especially for refugees who have sacrificed so much to bring their families to safety, there is tremendous resistance to creating art because it is not a sure path to financial security and community respect. The whole community benefits from this show because the work of these artists provides a window into the immigrant imagination and the refugee experience. 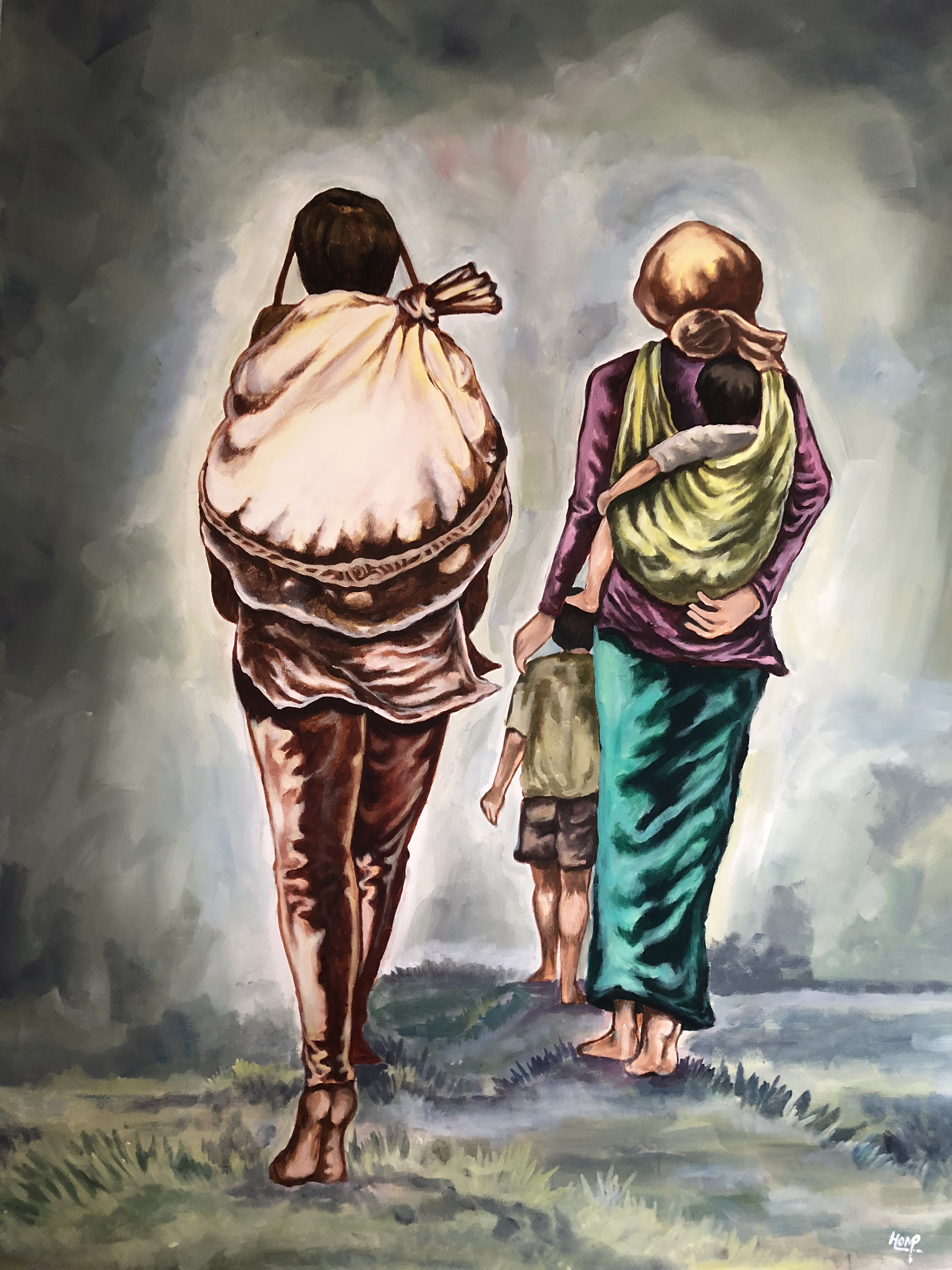 Ingrained in the cultural fabric of Vermont are the many cultures of the original inhabitants and the immigrants who have chosen to make Vermont their home. This exhibit illuminates the cultural contributions of some of the most recent immigrants to Vermont. Many artists, including Sabah Abbas and Virginia Diambou, draw inspiration for their work from the cultures of their native countries with their use of pattern and color, making Vermont ever more vibrant. Sabah Abbas and Hom Pradhan abstract and illustrate cultural rituals, with Sabah sharing memories from home in Iraq and Hom illustrating Nepali life in refugee camps. Their work models their culture for their children and informs our community of their heritage. In his photographs and poetry, Umesh Acharya explores the uniqueness and universality of Nepal and Vermont. Abeer Almogalli’s work is focused more closely on individuals and their personal journey transitioning between cultures. Sahar Alsammarae and Virginie Diambou have chosen a creative discipline, fashion design, which both maintains and interprets their cultures with luminous colors, textures, patterns, and lines. The creativity and resourcefulness of Crossroads mentees, in making their lives as they navigate multiple cultures, is the perspective of their collection of photographs. Their artistic choices make sense in the context of their evolving lives.

These artists illuminate the art of life as they intermesh meanings of home here and abroad in their art. Their work invites us to engage with each other across real and imagined boundaries.

We hope you will come to the opening reception of Visions of the World on Saturday, September 15th, from 2-4 pm to meet the artists and enjoy their work.