Dona Ann McAdams' Photography Exhibit: A View From The Backstretch

A View From The Backstretch is a collaboration between Dona Ann McAdams, an Obie- and Bessie award-winning photographer, and a group of horsemen and women who work at the Saratoga Race Course in Saratoga Springs, New York. The show features McAdams' black and white silver gelatin photographs and a collection of color photos taken by seven backstretch workers.

In order to better understand horses, McAdams began working as a licensed hot walker at the Saratoga Race Course seven years ago. In the course of working at the track, she found a community of people from all walks of life and different races and cultures who shared an inexplicable love of horses.

“It was as if we all had the same passport” says McAdams, “to the same country. I’ve often fallen in love with the communities I’ve photographed and then became a part of. But nothing I’d done before prepared me for the attraction to the horse and the horsemen and horsewomen.” 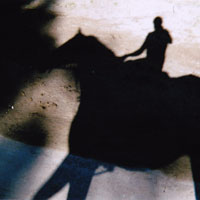 In 2010, she began putting cameras into the hands of “backstretch” workers—exercise riders, grooms, hot walkers, maintenance personnel, trainers, cooks—the unseen labor force of the racetrack, those who work closest with the horses, and who often are the most affected by the industry’s failings. She wanted backstretch workers to both document their lives at the track and their love of the animals they work with. Between caring and grooming and breezing horses, these horsemen and women learned photographic techniques, studied the work of other photographers, and critiqued each other’s work in a makeshift classroom—often a picnic table and a bench—on the backstretch.

Over the past year, the Vermont Folklife Center has worked with McAdams to deepen the connection between the public and these track workers by using the oral interview to further document their involvement with photography. Drawing on this body of interview material the Center has produced a series of short audio pieces to pair with backstretch workers’ photographs in the exhibit. A View From The Backstretch travels to the Amy E. Tarrant Gallery from the Vermont Folklife Center’s Vision & Voice Documentary Workspace in Middlebury. The exhibit was produced by and premiered at the National Museum of Racing and Hall of Fame in Saratoga Springs, New York.

McAdams is an internationally published and exhibited photographer whose work has been displayed at, among other places, the Museum of Modern Art, The Whitney Museum of American Art, and The International Center for Photography. She’s the recipient of the Dorothea Lange-Paul Taylor Prize given by the Center for Documentary Studies at Duke University, and her book of photography, Caught in the Act , was published by Aperture. She has run participatory photography programs with diverse communities including Appalachian farmers in West Virginia, people living with severe mental illness on Coney Island, homeless populations, and school children in the South Bronx. She lives in Vermont with her husband, novelist Brad Kessler.