The Flynn is pleased to present 81 Days and Nights, a new exhibit by Steven P. Goodman. Goodman, who studied at The University of Vermont, Parsons School of Design in New York, and L'École des Beaux Arts in France, has shown extensively throughout the region, including shows at the DA Gallery in Burlington and The Visual Arts Museum in New York City. He is represented by Reeves Contemporary in New York City. His work has been awarded by the Stratton Arts Festival and the Vermont Council on the Arts.

"As there were 81 days from the day I accepted the offer to show my work at the Flynn Center's Amy E. Tarrant Gallery until the deadline for hanging the exhibit, I decided to create 81 separate paintings," says Goodman. "Each painting will be 8" x 8" or a combination of the small panels. I will be displaying images as I create them but they may be reworked as the series develops."

"In my work, I attempt to express my political, spiritual, and humanistic concerns. Inspiration ranges from a particular moment in my life to an event taking place on the world stage. I try, however, to keep the work open-ended enough to allow personal interpretation on the part of the viewer. I liken my role as a visual artist to that of a poet but instead of using words, I compose with images, combining them in unique ways to create a personal statement." 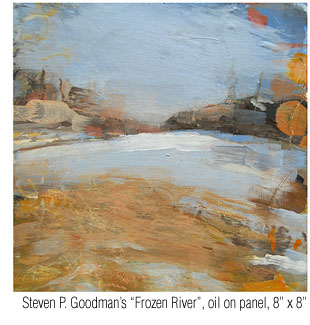